Just added to your cart

Everybody needs a good role model and there's one woman who has captured my heart unlike any other and it's Khadijah bint al-Khuwaylid (May Allah be pleased with her). 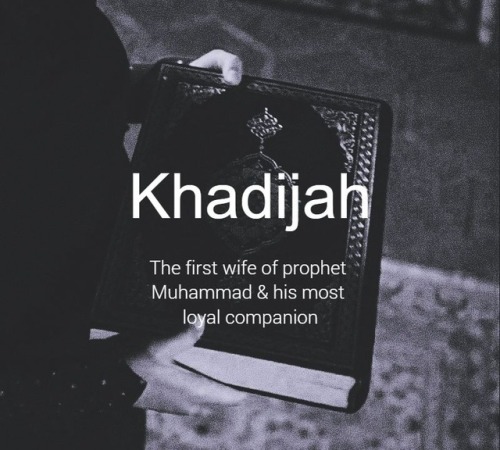 Here's the brief story of Khadijah and why she's my inspiration:

Prior to marrying the Prophet (pbuh), Khadijah was already a distinguished and successful female entrepreneur. Khadijah was highly-educated, financially independent, confident, determined and perceptive. At the same time, she was also a mother and a widow. She was the kind of woman many men and women would look up to today and perhaps be intimidated by.

Khadijah was the kind of woman who wouldn't allow challenges or social stigma to get in the way of her success and happiness. She saw something special in Prophet Muhammad (pbuh), a staff she had hired for her thriving textile business, and she admired and respected him because of his fine character which made her feel at ease. Despite being 15 years older, Khadijah did what would be considered unthinkable even by today's standards. She trusted her intuition and proposed to Prophet Muhammad (pbuh). When he received divine revelation and became a prophet after 15 years of marriage, she was the first to accept Islam and dedicate everything she had to spread the noble message that God is one and Prophet Muhammad (pbuh) is His final messenger. Being a strong woman only enhanced her ability to be a devoted wife and Muslim.

As a woman, I've learned a lot from Khadijah (may Allah be pleased with her): I hope to overcome my fears and apprehension and become more dedicated, disciplined, patient and tenacious in everything I do, inshaAllah. I hope to be more committed to my faith and spirituality. I hope to become more like my role model, Khadijah al-Khuwaylid, inshaAllah, because the power of a woman's love can change the world.
Who is your women inspiration ? I'd love to know so feel free to drop your comments below!
Back to Hijabi Women
Use left/right arrows to navigate the slideshow or swipe left/right if using a mobile device